It’s not every day that I take twitter polls seriously, but there was a large Catholic discussion I stumbled upon that was a wake up call to just how prominent the Marian Heresy, Mariolatry, remains within the Catholic church today. Stefanie Nicholas, a Catholic writer for OnePeterFive, polled her followers on the subject.

The fact that she was able to achieve a majority indicates a strong social media game, that can reach a sample that high, and we can assume that Protestants voted No which services the claim that devout Catholics practice Mariolatry. But Catholics swarmed the comments in droves to defend the practice. And in these comments the idolatry only grows more plain. 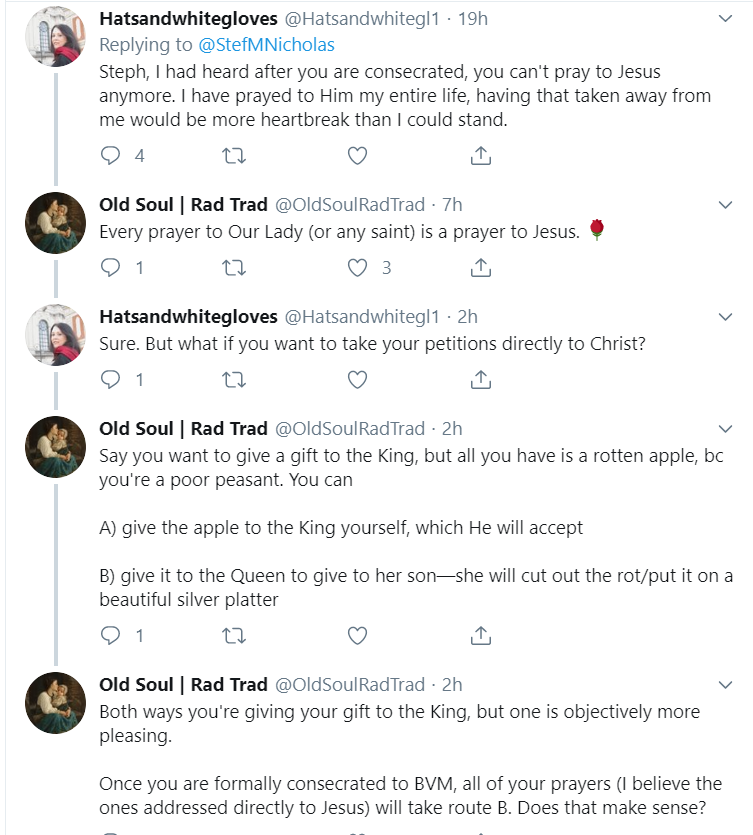 The excess veneration of Mary, to the point of prayer, is among the lines that should not be crossed if we are to worship Christ and Christ alone, Solus Christus. Furthermore, the website being promoted by Nicholas has this to say about consecrating oneself to Mary:

It’s clear that the threshold of worship has been met by the underlined sections, thus this practice is pagan. I will do further response to the Marian Doctrine of the Catholic Church, but for now it needs to be emphasized how there is no scriptural backing for Marian Consecration. When this worship is pointed out, Nicholas and her supporters pull a grandiose No True Scottman fallacy on the definition of worship and presume that Protestant faiths do not truly worship God, thus could not distinguish between worship and praise. This generalization, and outright false statement, received pushback from Catholics.

As desirable as it may seem to want to unite with Catholics under the body of Christ we should have no unity with those who practice Mariolatry. In closing, I want to make it clear that I am not generalizing all Catholics. For most Catholics are indifferent on matters of faith, just as most who claim to be Christian are not. But among those who take their faith seriously, the fraction of those who commit idolatry must be taken into account. When it comes to Catholics, particularly Catholics who seem like they actually care, extra discernment on an individual level is necessary, for idol worship is still present.

All Posts »
PrevPreviousLecrae’s Jordan River baptism is unbiblical
NextDarkLinks 2: Bad responses to the EDW, losing to SJWs, and science!Next