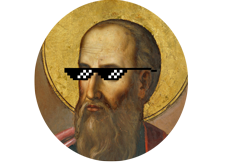 Origins of the term ‘Popularity Gospel’

As much as my work has contributed to the coining of the phrase Popularity Gospel, I stumbled across an interview that used the phrase, while I was developing my understanding of the phenomenon. Mattie Montgomery was the frontman vocalist for the Christian metalcore band For Today. He published a book earlier this year titled Scary God: Introducing the Fear of the Lord to the Postmodern Church.

To a large degree his book, as Montgomery explains, has to do with advocating a fear of God that is biblical, one that largely isn’t being taught in the postmodern church.

We have been taught — especially in our social media generation — that the most important thing you can be is popular. Your value as a person is defined primarily by the number of followers you have on social media, how many likes you get. So we have diminished the idea of self to being a commodity that is to be bought and sold. We market ourselves. We don’t just market a product we are trying to sell people. We market ourselves, which is such a twisted way to live.

Because we market ourselves and packaged ourselves as a product to be sold, if we ever come to a place in our life where people aren’t buying the product, we feel like an absolute failure. Ourselves, our individuality, our identity comes under attack. If people just don’t like us, they don’t follow us on social media or maybe they disagree with something we believe or something that we teach.

Similarly, in our generation, we are taught that the evidence of God’s hand on someone’s life or ministry is their popularity, how many people they are reaching, how many people come to their church and follow them on social media.

Now one objection I have, or corollary, is that it is the church pastors, not necessarily the congregants who are seeking popularity. The congregants could be drawn by a number of factors such as marketing, word of mouth, and location. It’s not likely that they are going to a church that preaches a Popularity Gospel because they themselves seek to be popular. In staunch contrast the church is actively seeking to be more popular, equating attendants with believers. It would come as no surprise if the attendants, in their daily lives, are more concerned with being popular then proclaiming the Gospel.

All Posts »
PrevPreviousReaction to Hillsong being in the closet
NextDarkLinks 5: SBC Should I stay or should I go?Next