The March For Life is a colossal failure

Every year since 1974, there has been a March For Life in Washington DC to protest the Supreme Court’s decision on Roe v Wade. Every year. But if this is an event to bring about a change, what then are the results or change brought about? But what does such a colossal annual event have to show for it? According to the “impact” page on the March For Life website, there are a lot of accomplishments unrelated to the abolition of abortion. In fact, the March For Life boasts the federal actions such as the removal of Title X funding to abortion factories, yet neglects to go so far as to take credit for the actual pro-life wins that have taken place at state levels. To the March For Life, President Trump addressing the 2020 March For Life is a massive win. Of course an organization would celebrate this feat.

As promised in an earlier article on the subject, I would give my take on Donald Trump’s speech. And I must say, I find it underwhelming. It was a good speech, applying theology, history, and appropriately barbed at political rivals. But the speech was nothing new. Almost everything President Trump spoke on regarding abortion was rehashed material that was well received the first time. In conservative media it was noted that Trump’s March For Life Speech was underreported, but Trump said nothing new that would provoke the pro-abortion media to address. If Trump had vowed to protect states who defy Roe v. Wade, declare that Planned Parenthood would be defunded pending a DOJ investigation, or more directly call for the complete abolition and criminalization of abortion, the country would be having a national conversation. But the speech was overshadowed, just as it was last year, the year before that, and the years where nobody cared.

The March For Life cares deeply about their organization, as evident by their listed accomplishments, despite taking credit for zero of the most significant pro-life wins in the history of the movement. Donald Trump has certainly been the most pro-life President in this pro-abortion era we live in, but the same amount of fervor cannot be said of March For Life. On their donation page its clear that March For Life is a massive grift of Big Baby. 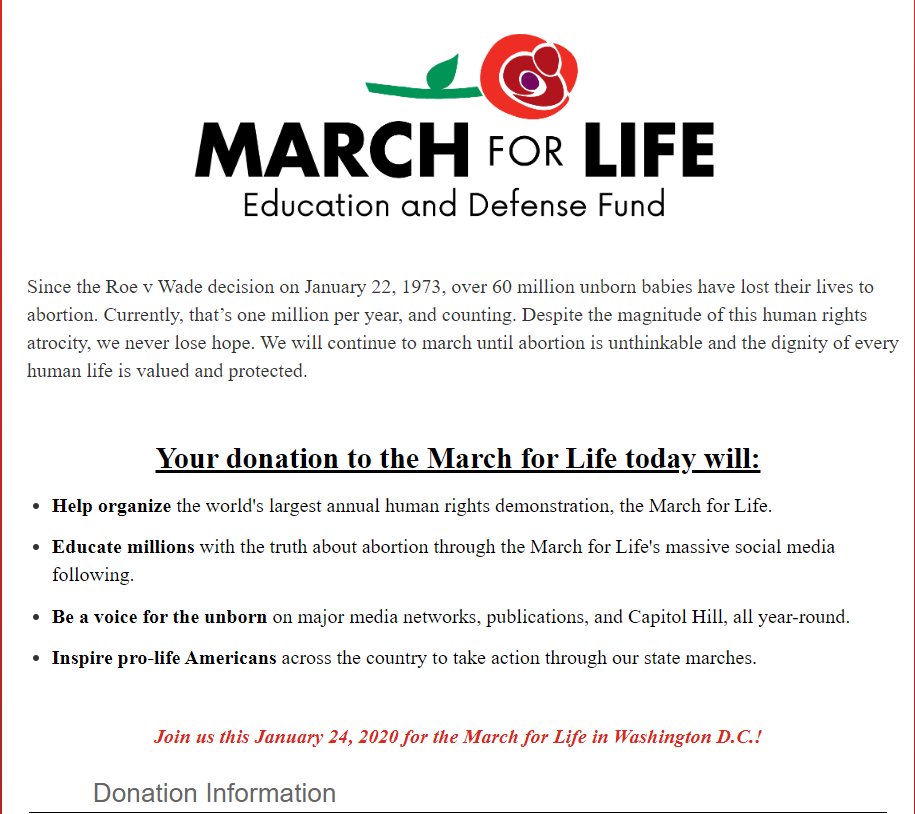 The first three bullet points are about perpetuating the relevance of the March For Life. Inspiring pro-life Americans is something we can do for free. I, for one, find it detestable to donate to an organization that says nothing about lobbying for abolishing abortion. Their sales pitch, bluntly put, is “donate to our organization so we can continue asking for your money.” This speaks to the uselessness of the March For Life educational fund. Its sister organization, March For Life Action is very vague about what it supports.

Pro-Life legislation has a broad definition in the lobbying industry. One of their articles dated 2019, celebrates the myth that partial birth abortion is illegal in this country. But the Supreme Court in their decision wrote a manual about how to get around the law. This feat is credited to the National Right For Life, another Big Baby grift. 2019 was a year of pro-life victories, but March For Life Action declared 2019 a year of pro-life victories, without mentioning Georgia, Alabama, Louisiana, or other states.

March For Life is comparable to the New Deal. It did not work; the debate is whether or not it made things better or worse. The dedication of organizing an event year in and year out is commendable, but it’s pressingly obvious that the event clearly fails to have a unified message or goals within the last nearly fifty years. But we are supposed to think that the March For Lie is a good messenger for the abolition and criminalization of abortion because its voices are women?

By no means. March For Life failed to champion pro-life legislation, at least, until they had no control over the movement. They protest Roe v. Wade but are apart of zero efforts to challenge or defy the ruling. Do they contribute to the pro-life cause on a cultural level? Sure. But the opportunity cost must be considered. Money to March For Life could have gone towards real pro-life organizations such as Save The Storks and Free The States. Factoring in the opportunity cost of our time, money, and attention, its clear that March For Life has been a detriment to the cause of abolishing abortion.