Willy Rice drops out of SBC Presidential Race over Deacongate

In a strange turn of events, Willy Rice has lost favor with the hands that were propping him up and has withdrawn his name from consideration for president of the Southern Baptist Convention. This follows this campaign scandal of deacongate, whereby he ousted a deacon from office in his church for committing a sexual sin prior to regeneration and long before he was ordained as a deacon at Calvary Church. In a video statement, Willy Rice describes what would become deacongate. Willy Rice cited Resolution 5 which was passed in 2021 which states:

WHEREAS, Scripture says that pastors, elders, and overseers are to be “above reproach” (1 Timothy 3:2) and “blameless” (Titus 1:6); and
WHEREAS, The Baptist Faith & Message says that pastors should be “qualified by Scripture”; and
WHEREAS, Sexual abuse is an action repugnant to the teachings of Scripture and reprehensible even to those who are not believers; now, therefore, be it
RESOLVED, That the messengers to the Southern Baptist Convention, meeting in Nashville, TN, June 15-16, 2021, believe that any person who has committed sexual abuse is permanently disqualified from holding the office of pastor; and be it finally
RESOLVED, That we recommend that all of our affiliated churches apply this standard to all positions of church leadership.

This Resolution was not biblical as the Bible’s elder standards laid out in 1 Timothy 3, Titus 1 and 1 Peter 5 do not necessarily examine the life prior to receiving salvation. For instance, if sin committed prior to salvation were considered a disqualifying factor in 1 Timothy 3:3, then alcoholics turned to Christ would be permanently disqualified. But such were some of us. Willy Rice is applying Resolution 5, which goes against Scripture, to a “sexual sin that could also be described as abusive.” This qualifier fails to meet even the extrabiblical elder requirements laid out in Resolution 5 as applied to a deacon.

The move also came off as highly political as Willy Rice mentions that a pastor from another church brought this issue to his attention indicating a political strategy session, as Willy Rice maintained that repenting from this specific instance of sexual sin was a consistent part of the deacon’s testimony. Despite knowing of this past sin, Calvary Church ordained him only to revoke the ordination when it became inconvenient to Willy Rice’s Big Eva aspirations.

The Southern Baptist Convention has been adopting a feminist view of sex abuse which includes adult women staffers who have years long sexual relationships with married men as victims of abuse. This new direction for the SBC is evidently now incongruent with Willy Rice being at the figurative helm. So he withdrew his nomination in the statement below. 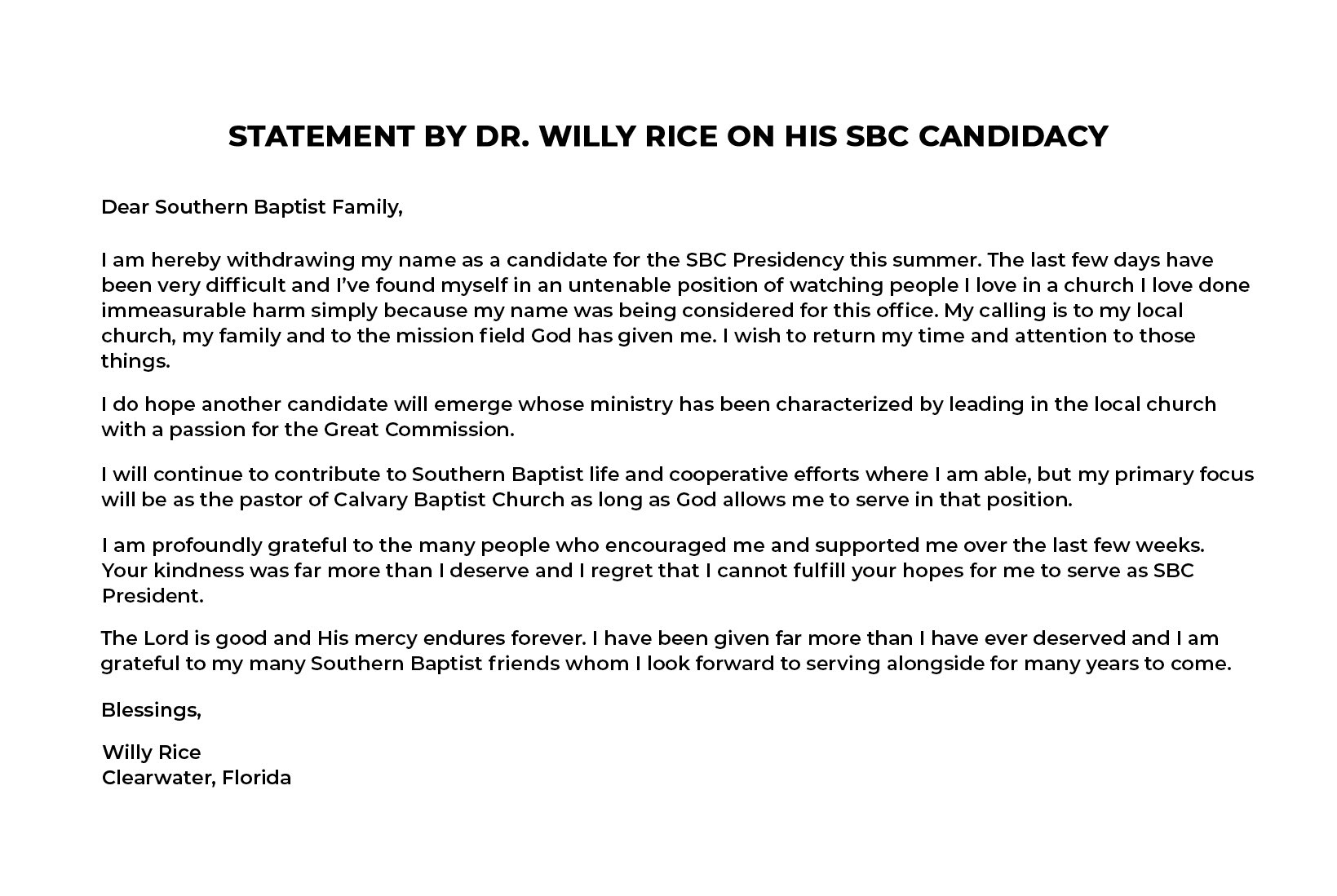 It’s worth noting the selective use of “Baptist” in his church’s name here, as Willy Rice looks to maintain his Baptist credentials while pastoring a Docent powered megachurch.

Tom Ascol now a commanding frontrunner in the race, as the liberals took out their own in the process of regrouping. When Willy Rice announced his candidacy, Evangelical Dark Web wrote, “Willy Rice is the next James Merritt, a political thug that will yield the bully pulpit to make the Southern Baptist Convention more woke, as he did in his sermon.” Feeding his own deacon to preemptively satisfy the woke mob is a thug move, unbecoming of a pastor.

Ultimately, it was his lack of credibility with the feminists that sunk his campaign, but grassroots Evangelicals have been publicly mobilized to sully Willy Rice prior to the convention in Anaheim, along with a renewed push to retake the convention.