40 Losers vs Doug Wilson: How Not To Do Discernment

There are a lot of good Christians doing discernment ministries out there. There are a few good ministries doing news gathering for Spiritual Warfare. However, there are a number of bad actors out there. Examining Doug Wilson or Examining Moscow is one such bad actor in online discernment. Being the primary source for much of Costi Hinn’s levied attacks on Doug Wilson, this group was quite butthurt when Hinn backpaddled in a sign of repentance (and our reporting on it). Nonetheless, how this group defines itself is full of glaring red flags. 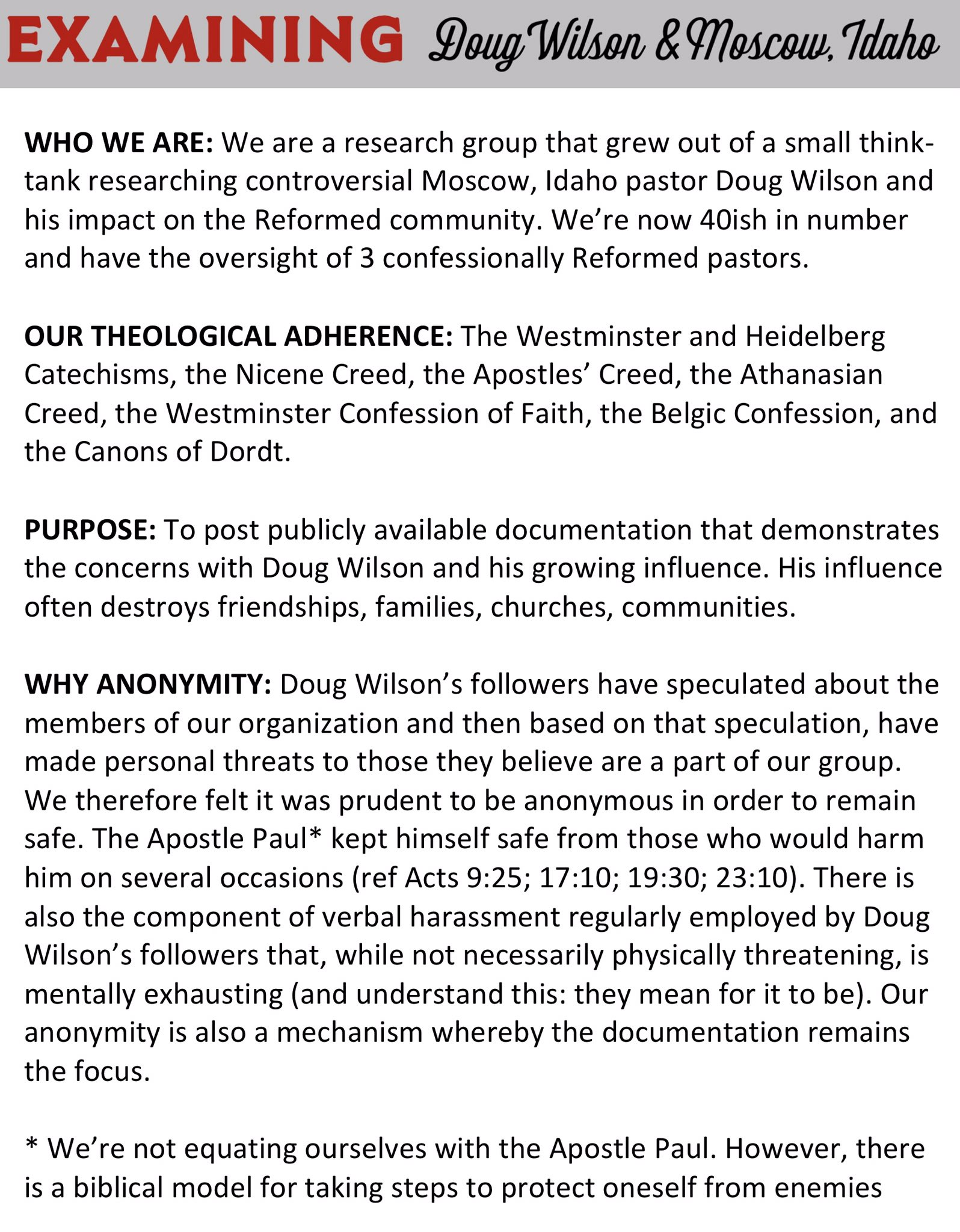 I question the validity of any group dedicated to a singular person or local church. It indicates a lack of objective standards in their assessment of information.

Nonetheless there are 40 anonymous people in this group chat that calls itself a ministry. The anonymity is defended citing unsubstantiated threats. Additionally, the line about mental exhaustion shows how effeminate these people are when it comes to online discernment ministry. Most of Evangelical Dark Web’s direct competitors (a term of endearment) on YouTube and online are not anonymous. Woke Preacher Clips being the exception. But WPC is not devoted to a singular pastor and largely operates as a LibsOfTikTok account. These people use anonymity as a cloak so that their errant theologies are not uncovered. And their liberalism and R2K theology is not hidden well on their Twitter.

Speaking of cloaks, the appeal to historic confessions of faith is a common tactic of liberals in the church. How many liberals in the PCA touted the Westminster Confession of Faith while peddling side b theology in the church. How many liberals in the Southern Baptist Convention cite the Baptist Faith and Message 2000 while defending women pastors. Historic creeds are easy covers for modern liberals and Big Eva types, because they can  adamantly how right they are about yesterday’s battles while being wrong on today’s battles. We see this all the time in discernment, which is another reason not to trust this anonymous group.

Just like how many of the people who pounced on Mark Driscoll had worse theology and nefarious intent (Christianity Today), the people who chomp at the bit on Doug Wilson are from what we can gather harbor even more errant views, such as Radical 2 Kingdom Theology and liberalism, which is very evident in the following and followers of the account. All this is plain without knowing who runs the account.