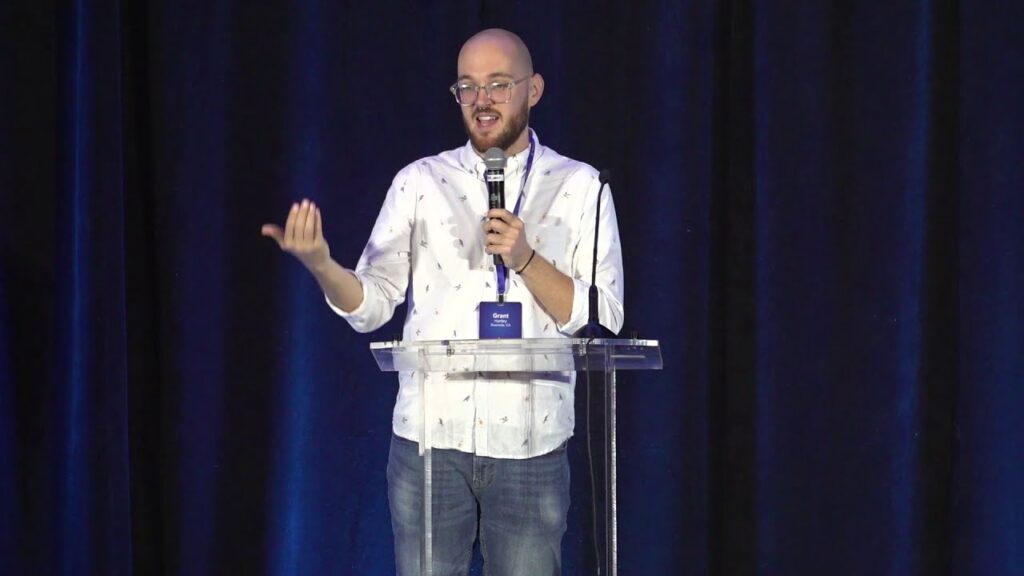 Grant Hartely is a younger, lesser-known figure in Evangelicalism. However because of his leadership in in the homosexual agenda with Revoice and the infiltration of Cru (Campus Crusade for Christ), we felt compelled to address him as a means of also confronting the Social Justice Gospel he is peddling.

I became involved in Cru my freshman year at Missouri State University in Springfield, MO; I had grown up in a Christian family and had made a decision to follow Jesus when I was young, but was struggling to follow him in a secular university context.  Friends and staff members in Cru provided a compassionate community in which I could grow in my relationship with God and the resources I needed to make an impact for the kingdom.
After spending several years involved in Cru as a student leader, serving as a missionary over three summers in East Asia, and serving on a ministry teams at college campuses in Springfield, MO and Riverside, CA, I am a radically different person than I used to be.  God has used Cru to truly transform my life!
One of the biggest areas of growth I have experienced over the past few years is in my heart for building bridges across culture with the gospel, and for reconciliation and unity within the body of Christ.  As I have met students with different backgrounds, experiences, and cultures, I have increasingly desired to be a part of reconciliation by bringing the gospel message of Christ to students, which has the ability to transform their hearts, minds, and entire lives.  My dream is that through those students, we will be able to see a Church characterized by unity in diversity, and a transformed by the radical love of Christ.
I am currently transitioning to an intern position on a ministry team stationed in Riverside, CA; I will be working toward my vision by reaching students on the campuses of University of California Riverside and California State University San Bernardino.  I would be honored and encouraged by your prayer and financial support in reaching students with the gospel and proclaiming God’s glory!

From his profile, we can see the likelihood that he is a proponent of the Social Justice Gospel.

Revoice is a conference that sought to promote homosexuality in the Evangelical church, most specifically the PCA. The American Family Association describes Revoice as a “conference to regret.”

A scan of the workshops offered gives the distinct impression that the purpose of the conference is to help the general Christian population embrace the “queer” (yes, they use that word) culture rather than to urge homosexuals to embrace Christ and Christian culture.
For instance, presenter Grant Hartley asks the question, “What does queer culture (and specifically, queer literature and theory) have to offer us who follow Christ? What queer treasure, honor, and glory will be brought into the New Jerusalem at the end of time (Revelation 21:24-26)?” The possibility that “queer” culture will be a part of the New Jerusalem is obviously not an option that Scripture entertains.
Another seminar asks, “What role (i.e., in the Church) is there for the unique experiences and gifts that sexual minorities bring to the table?” Whether these “sexual minorities” are repentant or unrepentant is not addressed, and yet their role in the church obviously hinges on the answer to that question.
Yet another asks, “What if we did what it took to become places where LGBT+ people could truly thrive in the vocations offered by an orthodox Christian sexual ethic?” Again, any mention of repentance is absent. Another seminar gives guidance to the homosexual “Christian” and when, where, and how to come out of the closet, not when, where, and how to come out of a sexually aberrant lifestyle. (“The particular manner of one’s coming out should be determined according to practical wisdom and oriented toward preservation and reconciliation of Christian fellowship.”)

In sum, there is not one single, solitary workshop directed to helping a homosexual come to grips with his sexual brokenness and find healing and hope in Christ to walk in sexual righteousness.

The Aquila Report on his Revoice Conference speech:

We need not dig far for tweets promoting soft antinomianism and “gay Christianity.”

Queer people can be holy.

Holy people can be queer.

Denying the power of the Holy Spirit to sanctify followers of Christ, to give the regeneration to assist repentance. In diminishing homosexuals by claiming that the Holy Spirit cannot turn them from their sin, he actually thinks both less of them and the Holy Spirit.

While “affirming” the Christian ethic, he affirms a sinful lifestyle, believing that a sinful lifestyle can coexist with one’s identity in Jesus Christ. This is best described as soft antinomianism, the distinction being he is not outright promoting the logical conclusion of the lifestyle itself, yet.

Self described as “FaithfullyLGBT” on Twitter. His account also includes pronouns signaling a belief in transgenderism/ gender theory which is anti-biblical (Genesis 1-2)..

Coming out is wonderful, but if it is not safe or wise for you, there is no pressure to do it. Take your time.

In addition he chooses to preach that homosexuality is his identity but not his behavior. The only identity Christians should have is as followers of Christ, not our sexual preferences. Like many in the Revoice Movement, Grant Hartley refers to homosexuality as a blessing.

Despite being grossly unqualified to minister, Grant Hartley is an influential figure in shifting Cru towards the Social Justice Gospel. This is documented by Jon Harris on his show, Conversations That Matter.

Since the original publish of this verdict, Grant Hartley has embraced the Roman Catholic Church believing it to be congruent with his homosexuality.

It’s clear that Grant Hartely is pushing a homosexual agenda on his followers and is a prominent figure in the millennial/GenZ generation of blatant false teachers. Ultimately, since this article was originally published in 2019, Grant Hartley’s embrace of Roman Catholicism make this the high watermark of his influence on Evangelicalism. For this we are glad. However, he will remain a social media gadfly with sizable clout.